As I mentioned in my inaugural post, we had a particularly hellish house hunt (think 9 months, 5 offers, and nothing but bidding wars…).  We ended up with our cute little house in a great neighborhood and an AWESOME yard, and while it was definitely “move-in-ready” it also provided us PLENTY of opportunities to freshen things up a bit.  Case-in-point was what we dubbed as the “Shanty Awning”.   I used to describe our house to people by saying “It’s the little blue one on the road to the park, with the ugly brown shutters and the awning that looks like someone floated to the U.S. from Cuba on it”.  People would laugh, but then once they saw it, would wholeheartedly agree.  Here it is, in all its glory: 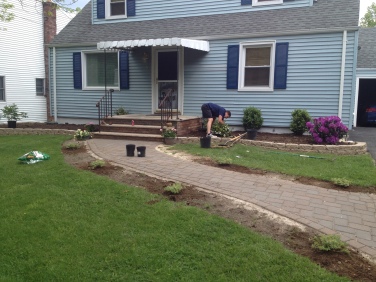 That’s my wonderful hubby diligently working on some landscaping in the spring, since there were literally NO plants in the front (see Operation Curb Appeal- Part One).   Maybe the previous owners thought shrubbery would take away from the magnificence of the shanty awning?  I guess we’ll never know- but I digress.  It’s obviously ugly.  We hated it from day one.  However, we really didn’t want to take it down without replacing it because it WAS pretty clutch having cover when it was raining out (for both us and the bird family that was living in it), and hiring someone to build a new portico would have been really pricey.   Thanks to the confidence instilled in DH by his friend Joe, an architect, who told him what fasteners we would need and said “you can totally build that yourself”, we (he) took on our (his) biggest project yet!

Being the enginerds that we are, we started with a plan.  Mike downloaded SketchUp, a free google program for engineering models/drawings, and drew up the front facade of the house.  It was a really useful but admittedly not very user friendly.  I got a little ambitious and tried to draw up our full floor plan in a separate file and I couldn’t figure it out, and I do have experience with engineering graphics software (it was 9 years ago, but still).  However, my wonderfully smart and hard-working hubby put in the time to figure it out.   After playing around with dimensions and materials, we settled on the general style/form factor below.  Don’t mind our improperly sized door and light fixture screen shot- we’re not professionals here.

Mike took the plans, based on the SketchUp drawing and general information on the up-to-code fasteners and supports he would be using, to the building inspector to get a permit.  The town engineer had a few suggestions/changes and gave us the go-ahead.

Then came the fun part- demo.  While on all the shows on HGTV, demo day IS the fun day- but I use that term VERY sarcastically. We really should have had a camera crew on site, because true hilarity ensued and nobody got to witness it.  We managed to disassemble the awning (I tend to use the term “we” loosely but I did help!!) to the point where it was no longer really attached to the house, and was supported by a few 2x4s perched underneath coming up at an angle- image below.

No birds were harmed during the demolition of this structure

We had a fool proof plan.  Mike was going to stand under what was left of the awning and support it with his man-muscles and brute strength, while I removed the wood supports and got out of the way so he could toss the metal carnage onto the lawn.

However, as soon as I removed one 2×4, the shift in weight caused the other one to fall onto the ground at the foot of the stairs.  I froze, as Mike stood literally holding a gigantic, heavy mangle of metal parts over his head.  This was not part of the plan!  What do I do?  Do I go pick it up? I didn’t have to think on it too long before a bellowing “MOVE!” came out of my hulk-husband’s mouth, which I promptly did, and he walked down the steps, tossed the awning onto the lawn, turned to me in disbelief and asked me if I was trying to kill him.  We still laugh every time we think about it. 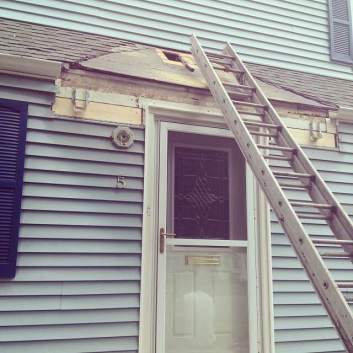 There’s a hole in my roof

Then, he set to work on building.  The picture above shows initial progress of removing some of the roof for the interface of the new structure.  The hole is so the beam at the top of the portico could tie into a beam in the house.  One of our neighbors joked that our house may blow away in a storm but that portico will stay standing, and he is probably right!  Honestly, Mike completed this project so long ago that I know I’m missing a bunch of details and pictures. So, to skip over the rest of the details that are boring and/or I forgot, here are two big lessons we learned throughout this project (after the demo day debacle):

I’m sure there were a million other things that we learned along the way, but those seem to be the most memorable.  It’s a year later and there are still some finishing touches left lingering (railings, some trim pieces, etc), but like many of the small details at the end of all of our projects, they’ve been de prioritized.  The “finished” product is below!  What a difference it has made for the whole look/feel of our home!

If you were worried about the displaced bird family, fear not- to our surprise, they returned and took up residence in the new structure.  I wonder if they’re impressed with their upgraded digs.  Maybe I’ll have to work on a bird house project this spring!